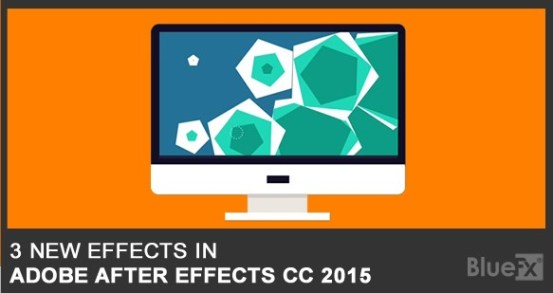 Today’s post covers the 3 new effects that come with the Adobe After Effects 13.6.1 version. We have already covered the improved previewing and workspace, the Face Tracker and the Character Animator.

Adobe saw the value of Cycore stuff and said, “Let’s just include it with the After Effects”. I presume they have a licensing agreement worked out. I don’t know the details but now you’ve got tons of Cycore effects inside After Effects.

Now let’s see how you can find these CC effects in AE.

You should just type CC in the search box. That gets you to all various CC effects and CC stands for Cycore.

If you double click on HexTile, it will add it to this particular clip.

There’s HexTile which looks kind of like a beehive.

Now you’ll see how to modify it, by using the control panel on the left side.

It has a center. It’s hard when the tiles are so small.

You can increase the radius. I can drag it to his eyes, then I can change the size of the tiles.These are obviously key framable and you swirl around that.

You can rotate it around the center like so and smear it. You can pull away from it like that. It’s called smearing.

There’s a standard tile like that and two other ones that get pretty wild and wacky.

After searching for it, double click on it.
It immediately puts a vignette around the image.
A vignette either darkens or lightens the edges.

You can choose to do so by using the Amount feature.

You can also change the center.

Another cool element is pin the highlights.

Quick tip on applying a mask the old way

Old way of applying a mask
The old way of doing this was you typically apply an oval to the image using a mask. The way you do that is by going to the shape and getting an ellipse tool, just double clicking on it and it automatically adds – it’s called a mask.
What it does, the mask protects an area and makes the other areas transparent and so basically you have this black area here. Then, you can adjust this in terms of opacity and also soft edges to it. That will put the mask. And you have the mask feather, you can feather this a little bit like so. And you can reduce the opacity on it. That will be the typical way to make a mask.

The reason it’s funny is because there’s a vignette option inside Lumetri.

I mentioned earlier that Lumetri effect maybe is not as cool as you would first think because it looks like a huge effect. But if you go to the color effects, you can say, “Wow! Look at what they’re doing here.” They’re giving us this great color correction effect here inside After Effects. 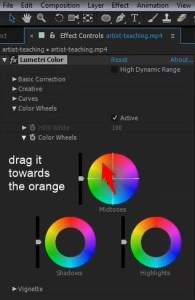 If you go down the bottom here, you’ll see there’s a vignette.

Learn After Effects, the easy way-video