Adding footage to a sequence in Adobe Premiere Pro 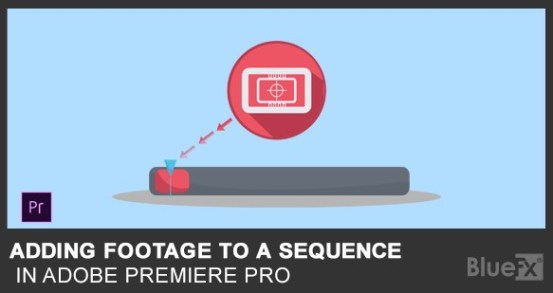 In today’s post, Jeff Sengstack, our certified Adobe expert and instructor, will show you how to add footage to a sequence in Premiere Pro, how to set it to frame size and how to position it.

Note: Remember to watch the video tutorial we have prepared for you.

Alright, the first thing I want to do is put something inside this empty sequence, like putting something inside an empty cup. This image here, Number 3, is the only one that is actually in horizontal format, which matches more or less the format of the sequence. I’ll start with that one.

The way you add something is just dragging it to it, like so, to the video.

I can move it around and place it wherever I want. I’ll place it at the beginning, and that’s where it snaps. It snaps because this little magnet thing is “turned on” by default. That’s the Snap Tool.

Now if you compare the initial image and the one in the sequence, you’ll see that’s there a lot more sky showing.

You should know that:

When you add something to a sequence, it centers that thing and shows only the area that would equal the size of the sequence, in this case 20×28.

Anything outside that is off-screen, which is the way it should be. That’s the way you want things to be. You don’t want to be surprised and have it automatically go down to the right size.
I can right-click on this, as you do in After Effects and I think I’ll “Scale” the frame size, “Set” to frame size. 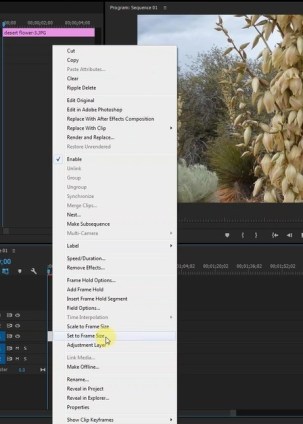 Set – this changes the scale to a smaller percentage.

Scale – makes it fit and then set the percentage to 100, which is weird, but it loses some quality if you use “Scale.”

If you use “Set,” it maintains the quality.

If you use “Scale,” it has fewer pixels, which makes it easier to play back if you ‘ve got a really big picture. 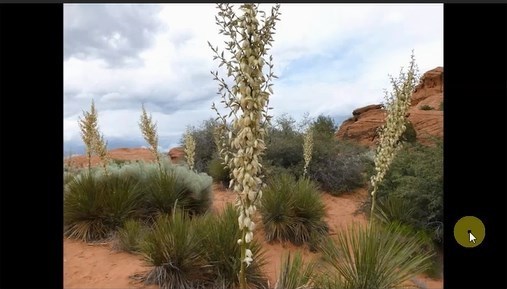 This was shot with a still camera so it comes out not 16x 9, but something less than that. But that’s been set to the full height anyway.
I click on this to make it “Active.” You see it’s Active, because it’s white.

With “Active,” you can open up the Effect Controls.

Anything that has images in them, whether video, graphics or footages has these 3 effects already applied.

They’re just there sitting in neutral, waiting for you to do something. There is:

which we are not going to go through here, because it’s a way to do Slow Motion that’s tricky.

Access your ‘Video editing with Premiere Pro’ Course in the After Effects Academy.

Jeff Sengstack will show you how edit videos in Adobe Premiere Pro.

Inside Motion (that’s like Transform inside After Effects), you’ve got

which is again something you don’t have to worry about.

Position, Scale, Rotation, and Anchor Point and then Opacity down here.

That’s supposed to keep you inside the Transform properties inside After Effects.

Right now, there are these black bars.

In After Effects, when you create Comp, you have Transparency that will be behind it.

This will be transparent but it’s black, because it’s helpful that you set the background to black. But you turn on Transparency, you’ll see that’s transparent.

In video, any place you don’t put something, it’s going to be black when you then export this thing out to a video file. That is “black” by default and you can’t turn on Transparency for that because it won’t work.

Video is always going to be black there where you don’t have any pixels put there.

I might want to change the scale of this thing now that I’ve set the scale to automatically not be at 31.3%.

But if I want increase the scale so that it goes to the edge a little bit, I can start dragging this to the right a little bit, freeze the scale till it gets up there or about.
And if I want to change the plant’s position here, I go from Fit down here.

I can go 10% so that I could see when I click on motion where the edges are there.

If I want to change that, I can use the x and the y values (Position).

Y values are along the right or I can move this thing up or down, more or less of the object of the view like that.

I go back to Fit here.
So, that’s our first thing.