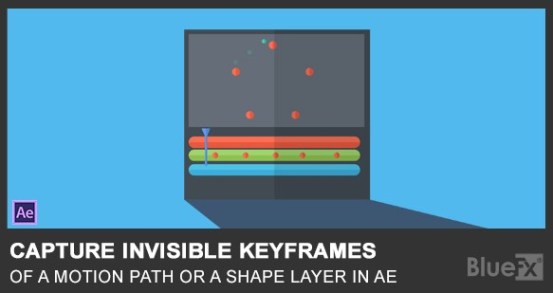 Today’s post is about capturing invisible keyframes of a motion path or shape layer.

Note: Remember to watch the video tutorial Jeff, our Adobe certified expert and instructor, prepared for you.

You can use the Mask Path or these points as keyframes which is really a remarkable little thing that you can do. So we’re going to do that to create the path for our animation.

What is a null object?

A null object is just an empty layer but you can move it around. You can adjust its position.

I’m going to right click outside the other layers and choose New ➨ Null Object.

So, I want its position to be on that path. So, we open up this – go to star layer.

Press the M-key that displays the mask.

And if I click on Mask Path, you don’t see any keyframes here.

But believe or not, if you just click on Mask path and do control or command C to copy, you’re actually going to copy a whole bunch of keyframes that you don’t see. It’s really cool thing. But they’re there. All these little points will be a keyframe – will be keyframes.

Next I can go to the null object and press

and make that active.

Let’s remember the shortcuts you can use to change layer properties.

Access your ‘Creating Blow Torch Sparks and Fireworks ’ Course in the After Effects Academy.

Jeff Sengstack will show you how to use the CC Particle World video effect to
create blow torch sparks and a fireworks show .

So, we pressed P for position and made that active.

Now I am going to put the current time indicator here at the beginning. Or actually, I’ll put it in a little ways so I want the animation to start just a little bit into the comp. You could adjust this later but I’m doing this now.

If I do control or command V, the paste, it will paste in keyframes and the keyframes will be two seconds long, that’s by default.

When you copy a path, you’re actually copying all paths of the keyframes, one for each of these points there.
And the when you paste it, the keyframes show up in the two seconds timeline – time duration, which you can easily adjust.

So, if I could adjust it, will they all be active like this?

You make keyframes active by just clicking on the name of the property.

Now, they’re all active.
If you click on the last one here

Hold on the alt or the option key

you can stretch them out overtime which is really cool.

And we’ll probably adjust this later when we adjust it to the duration of the sound effect that we’ve applied here.

But now if you take a look at this little null object layer, I’m going to turn off the star and the background here, just an object layer. If you see that null object layer there which is represented by that square, which probably won’t be visible when you render this but look at that.

You can see, it’s now going to follow the star, follow the keyframes which I think is really a sleek way to make an animation. Alright, we’ll turn things back on now.

And the trick now is:

How do you get that animation there to directly control the particle animation?
So, all we need to do now is create expressions for the particles position.

If I go back to particles, make that active, turn that on.

And I go to Effect Controls Panel, I’ll close everything else down here. 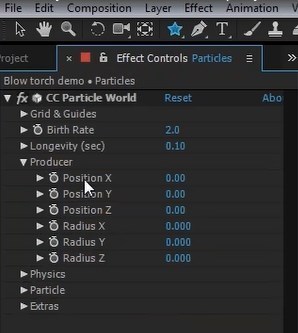 There are positions X, Y and Z.

Note: We’re going to work only in the 2D plane, not in the 3D depths here. But you could also animate a 3D animation, if you want you can go back or forward in space but we’re only going to work in the X, Y plane.

If I were to try and animate that with keyframes using Position, it’s kind of weird.
I’ll show you, if I drag it to the right. You see it’ll only go to the edge, it’s just point five. You would expect it to be some number like 360 or something like depending on the width of the comp but it’s not. And that number is – really depends on the pixel aspect ratio of the comp and the aspect ratio of the whole comp.

The bottom line is:
It’s kind of difficult to use this to control the producer. So, undo that.
You should use something else to control it.

You use the null object layer to control the animation.

And that’s really the bigtake away from this class.

And besides of that, about learning about how you can copy and paste keyframes on a path.

The takeaway here is that

you use expressions to control the animation of the position.