Creating a realistic window frost in After Effects 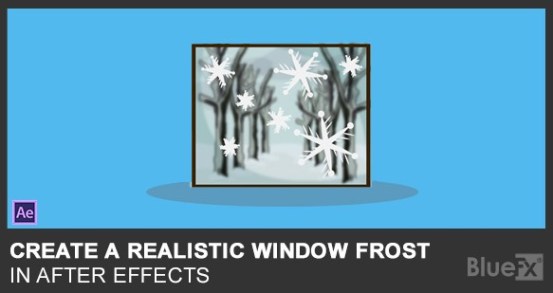 Note: Remember to watch the video tutorial we have prepared for you, it will help you understand better the whole process.

Right now, if I put the Frost over it, it won’t look all that great because it’s going to be in focus.

I’ll show you what I mean. I’ll take the Frost-white-new and put that on top. 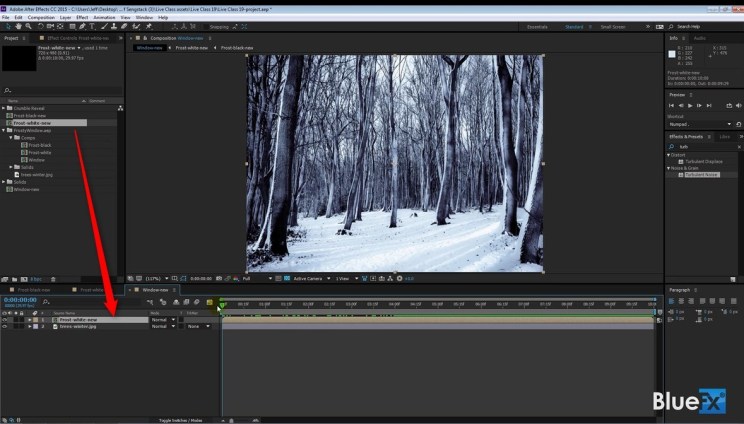 Again, it acts like a layer even though it’s got two layers in the original one but over here it’s just one layer. I double-clicked, by the way, to go back and forth.
So Frost-white-new if I go forward, you will see it animated like that. But we want it to look more realistic than just the stuff, kind of, appearing on the scene.

What is that, right? It doesn’t really look like a window right now.

So we fix that by making the trees be a little out of the focus and also adding some snow.

A cool snowfall effect is the CC Snowfall.

I’ll go click on this thing right here and go “Snow,” and there’s a CC Snowfall.

You see there are all kinds of properties. 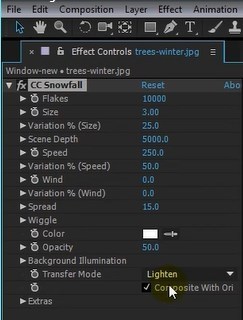 Rather than me explaining all of these things, basically, we’re going to:

I’m going to go cheat a little bit here and go get the one that I made originally.

So I’m going to click on New, go to Project and open up the window right there.

And select the trees.

I go to Effect controls and I’ve got a:

Press Control, Command-C to copy them.

And go back to your Window-new folder.

I’m going to apply those three to this one by opening up the Effects control panel while getting rid of the current Snowfall (deleting that).
You click

And there are all of these three effects.

What do we notice?

The first we’re going to look at the Snowfall. So we got a lot of flakes, quarter million flakes.

And we’ve got a huge Scene Depth, and the reason for the Scene Depth is that- this allows flakes to be close to the camera.

Let me turn off the Frost for a second.
See that, the flakes will get close to the camera here. See these lakes, they’re kind of large. And also off to the distance. And this parallax here which is really amazing. The ones that are close move faster, at least that’s the perception; than the ones off to the distance. It’s very clever effect. Really works pretty well.

And then, I’ll also add a little bit of Camera Blur to it.

I’ll just take a look at the Blur Radius and things like that, in terms of how this thing works.

And I change the Curves a little bit. I just pulled down the Brightness a bit and then made it a little bit darker here on this end as well.

Just to make the scene a little bit darker outside, I put it a little too bright to be snowing, right?

Okay. So that’s how that works.

Now I want to give it a Vignette. So I’ll go forward here and turn on the Frost.

I want to put in a little Vignette around here so it kind of looks more like this, a sort of fog that you get on the window. It’s pretty easy to add a Vignette:

just right-click here in order to add a solid layer

And we’ll make it white. We want it to be white for sure here.

Access your ‘Creating a frosty window and a crumbling wall reveal’ Course in the After Effects Academy.

Jeff Sengstack will show you how
to use the Turbulent Noise Effect and other effects to create a frosty window.

I’ll put that Solid underneath the Frost and above the Trees here, basically makes it a window.
Right now, it’s not looking like the way we want it to look like.

But I’m going to put a mask on it and let the mask control the edges of this thing.

We’re going to add a mask to it. And I want the mask to be equal to the sides of this thing. So to do that, it’s very simple. I want it to be rectangular.

I go up to the Rectangle Tool here and double-click on it and that adds a mask to that layer.

Since the layer’s active, it didn’t add a new shape layer. It added a mask to the layer that was active. There’s the mask. Open it up a little bit like that, you see the Mask there.

So I’m going to invert it that way it makes this layer transparent which is- seems kind of tool right but you’ll see how it works in a second. 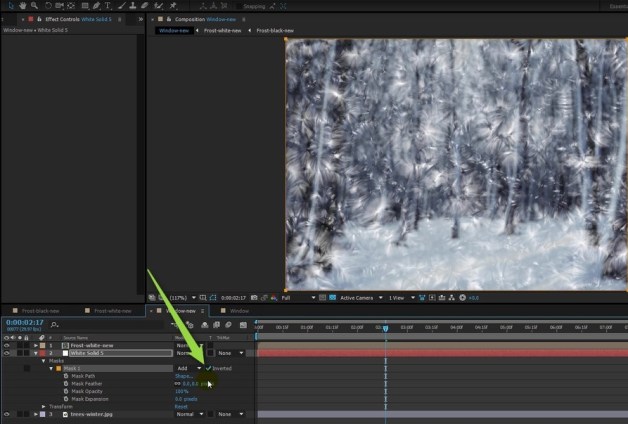 So now, the Mask is not protecting this area. It’s actually making it transparent.

So this is white, that’s not transparent.

You see that we start pulling in the edges a little bit. It makes it look like frost along the edges. That’s pretty cool.
And you can adjust a few other things.

So there you go. That’s how you put a frost on a window.