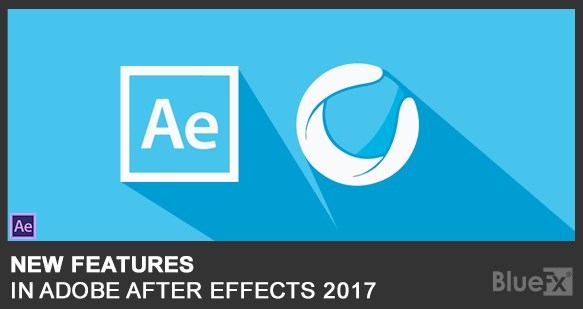 In today’s post, Jeff will talk about some new features in Adobe After Effects 2017.

Note: remember to watch the video tutorial, it will help you better understand.

We’re looking at the New Features Summary here.  I’ll scroll down.  There’s a new 3D composition renderer, Cinema 4D.  Cinema 4D is from a company called Maxon and it’s a great 3D product. For years, folks who have used Cinema 4D have been working with After Effects at the same time. 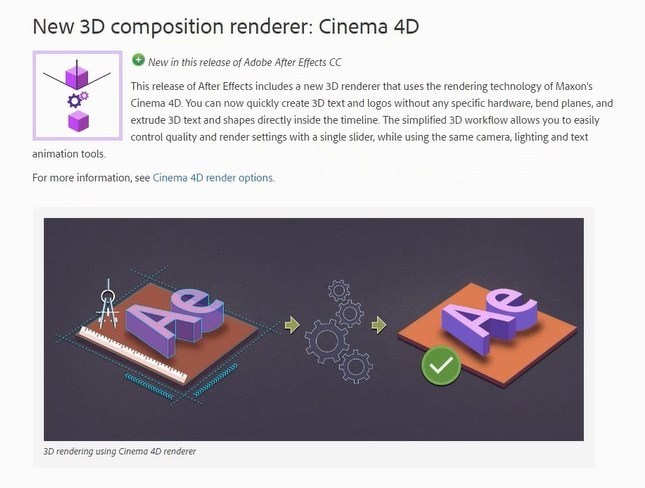 It’s a pretty good workflow back in the day where if you’re working in Cinema 4D, when you make a 3D product that has multiple layers, it’s really very complex.  Some layers will be for reflection, some layers will be refraction, some will be for glow and things like that.  There’re all these different layers to comprise this 3D project.  You can import all those video layers as 3D files in After Effects and work on them in After Effects.

Now, there’s a new workflow in After Effects where you have the Cinema 4D engine running inside After Effects called cinema renderer, which allows you to take a Cinema 4D project and animate it without having to render the video files.  If you want to go back to Cinema 4D to fix it, you can fix it and it shows up in After Effects. It’s a great workflow.

Now, with this release of After Effects, they now have this cinema renderer, this Cinema 4D renderer running as a 3D renderer inside After Effects.  From my point of view, though, it’s a work in progress.  It does not replace the current 3D renderer which is called Ray Trace.  I’ll show you what I’m talking about.

To do this, you switch a layer, this particular text layer here. Turn on this 3D switch that’s below the little box.

If you want to click the switch, it will become a 3D layer.  When you click that, you get this little button up here.

If you don’t have the 3D clicked there, you won’t see this.  With that layer that’s 3D, that means this composition is now going to be in 3D.  You choose the render up here.

What’s nice about it is that now when you change a layer to a 3D layer, you get this button up here which gives you direct access to that particular panel.

What’s new to 2017 is in this dropdown list in addition to Classic 3D which is sometimes called 2 ½ D because it’s a 2D object in 3D space.  It’s a flat thing in 3D space.  Now, there’s a cinema 4D renderer there. 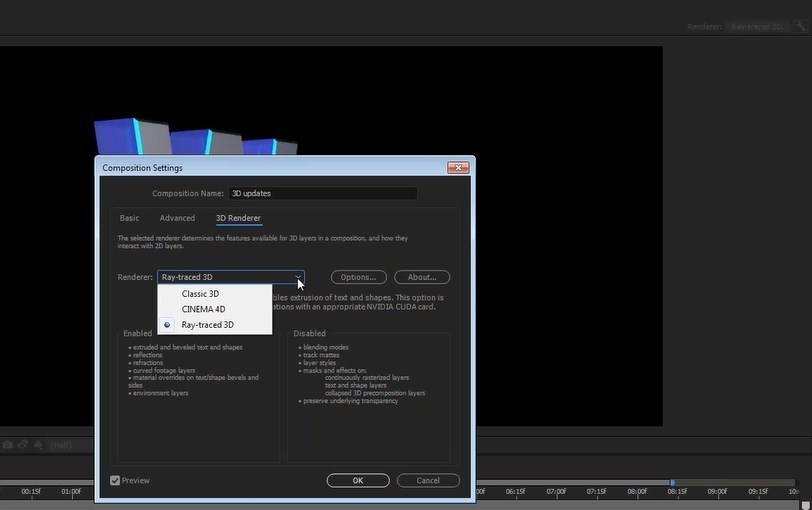 I’ll show you what I mean.  Here this particular 3D thing I created which is very easy to create. You’ll just make a text and click on 3D box there and then you extrude it.  This is a Ray-Traced 3D thing.  You can tell it’s Ray-Traced because it says Ray-Traced up there.

I open it up and go to something called Material Options.  It says Geometry Options where you extrude it. 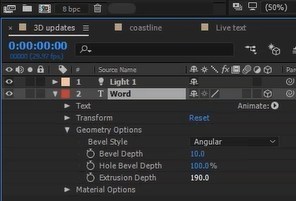 It says extrusion, depth.  I deeply extruded it to 190 pixels.  It’s very deep.  It has a bevel style, too.  That’s where you adjust the geometry. 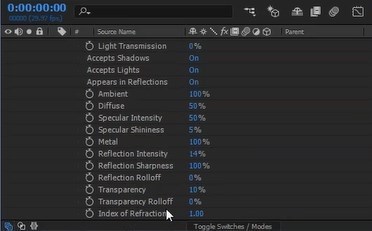 If I play this, you will see the animation there.  You can see the transparency more obviously.  Well, guess what?

Take a look at those things down there. If I change the renderer to Cinema 4D, all the refraction, all the transparency goes away.  It does not allow you to have transparency.  Notice it’s all opaque now.


Jeff Sengstack will talk about the new features in AE CC 2017.

That to me is a real drawback. Some people say that the Cinema 4D renderer is faster.  “If you want to animate it, it works better.”  I have not noticed any obvious differences in rendering speed. I would say it’s a work in progress. It’s cool they’re doing it but it’s not ready for primetime.

I’ll go back to Ray Trace 3D and notice the transparency issues come back.  By the way, because I have rendered this before, After Effects remembers that you’ve rendered it before. Now that I switched back, it almost re-rendered and we’ll it real time like this because I played it in real time before.

Once you play something in real time, it stores it in your hard drive and/or in RAM and if you change it but then go back to the original thing, well the cool thing about After Effects is that it remembers that.  It’s cool that works.  If not, then it would have kind of pixelated.

If you have any questions, feel free to type in any question and I’ll try to catch it over my question pod over here in my other monitor.  If I don’t see it right away, I’ll try to get to it sooner or later.

I’ll try to go back to this page here.

You would think this would be not such a big deal because this should be happening all along but it hasn’t been.  After Effects has never been oriented towards playing back videos smoothly.  It hasn’t been that kind of thing.  It’s more special effects.  Special effects consume a lot of processor power and so you expect they won’t necessarily go quickly.

After Effects is now catching up to video editing products.  If you work with Premier Pro, for example, and you just press space bar to watch a video, it plays smoothly which is great.  It’s what you’ll expect.  Well, with After Effects, it didn’t happen.

Now, with this release of 2017, playback of video is smooth.  I press space bar and off it runs and there’s no hesitation, no pausing, nothing like that.  It plays video smoothly.  Even if I add some effects to this, it will still play smoothly.  It won’t necessarily play smoothly with all effects added.  But generally speaking, if I add a few effects particularly once without a marker there on the radiant side, not only the left that says 32 but the one the right – the one on the right means that it’s GPU accelerated. I’ll talk about that in a second.

If it’s GPU accelerated, then it runs off your graphics process unit and works more smoothly and presumably faster.  I’ll just drag it down there – Gaussian blur.  I’ll make it blurry which is not necessarily a good thing for this but I’ll show you how that works.  Let’s say I’ll add hue saturation as well.  It’s also an accelerated effect.  I’ll change the hue a little bit like that.  It looks terrible but I just want to show you how it works.

If I go back and play this now, notice there’s nothing green and nothing blue there.  That means there’s nothing to render already.  If press the spacebar, it will play it in pretty close to real time.  In fact, it’s playing it real time just like that.

Even with the effects applied, the new system now plays video in real time.  If you apply some effects to them, it should play real time as well.  That’s a good thing.