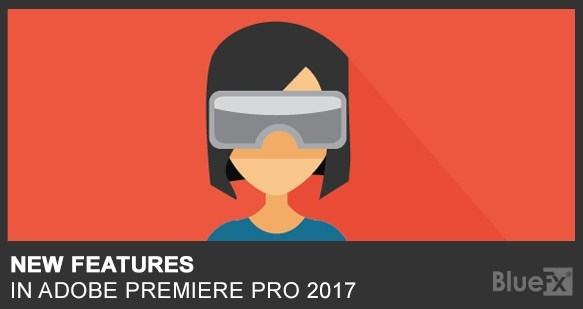 In today’s post, Jeff will talk about some new features in Adobe Premiere Pro 2017, that are related to the VR support and to the way that Premiere Pro can recognize VR videos and export them.

Note: remember to watch the video tutorial, it will help you better understand.

There’s a new VR support. VR has been around for a few months. It came out early 2016. Premiere Pro will work with those so-called VR files. What’s new is the controller for the VR files. That gives me the opportunity to talk about VR which, I think is a cool thing to talk about.

Because we’ve not covered this thing and because it’s fairly narrow for you to shoot VR, you have to have a whole bucket load of cameras and gear to do it. It’s not a simple task. Imagine not many people are shooting VR. If you do shoot VR, then you can know that you can edit your stitched together VR file inside Premiere Pro.

I want to back up a little bit and show you the workflow for that, how you get to this point where you get a video that looks like this. 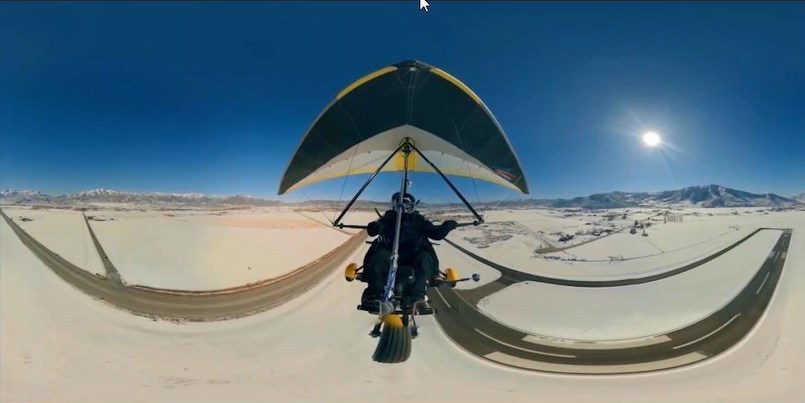 I want to back up a little bit and go to this website. This is the source of that video file, a company called 360 RIZE. They just sell this. These are the things that hold the camera. These are all Go Pro cameras. They don’t sell the Go Prop, they sell the device in which Go Pro can go. I think they also do it as a package plan as well. These are plastic containers that hold the Go Pros. There are organized clips that you find the start, stop buttons. You can view the digital read-ons to tell you what format you’re recording and that kind of stuff. It’s really compatible with Go Pro cameras.

This is the de facto standard now of Pro 7. What that means is that there’s seven cameras, five mounted around like this, one on top and one at the bottom. That way you get a whole 360-degree sphere of files.

The way it typically works with these is that you use what’s called the clapboard. Most people don’t have clapboards. Those are things that you snap like that with time clip on, that kind of thing. Most people don’t have those so you just do this and you make some noise and you see something visual, at least a couple of the cameras. That provides you an audio cue and then you can line things up that way.

Once you stitch it together, then you export the video. Frequently, it’s an MP4 video. It’s like a standard MP4 video.

Here’s an MP4 video that was shot by that company. I got to their website and it was a publicly available one.

I’ll just briefly show you when I go that.


Jeff Sengstack will talk about some new features in Adobe Premiere Pro.

It’s a good thing. That’s one of the new things inside Premiere Pro is that they recognize VR files now.
The type of projection it is called, it’s called equirectangular. This is the de facto standard now for VR.

When you stitch together all these cameras, you create an equirectangular video. The layout can be monoscopic or stereoscopic. Some sets like that seven cameras I showed you, some of them have many more cameras where there are two cameras per angle. One camera can be one above the other or side by side. Those are two stereoscopic approaches as well. But my goodness, try to imagine trying to stitch that many cameras.

The layout can be monoscopic or stereoscopic. Some sets like that seven cameras I showed you, some of them have many more cameras where there are two cameras per angle. One camera can be one above the other or side by side. Those are two stereoscopic approaches as well. But my goodness, try to imagine trying to stitch together that many cameras. Most people shoot equirectangular monoscopic.

The issue is how wide is the view.

That’s what’s cool about Premiere Pro is that it recognizes VR videos. That’s really important.
Now that it recognizes it, how do you view it here besides seeing this strange piece of video here?
You want to see it the way your viewers are going to see it.
The way it works is you go to this little wrench here in Premiere Pro. That’s called settings. 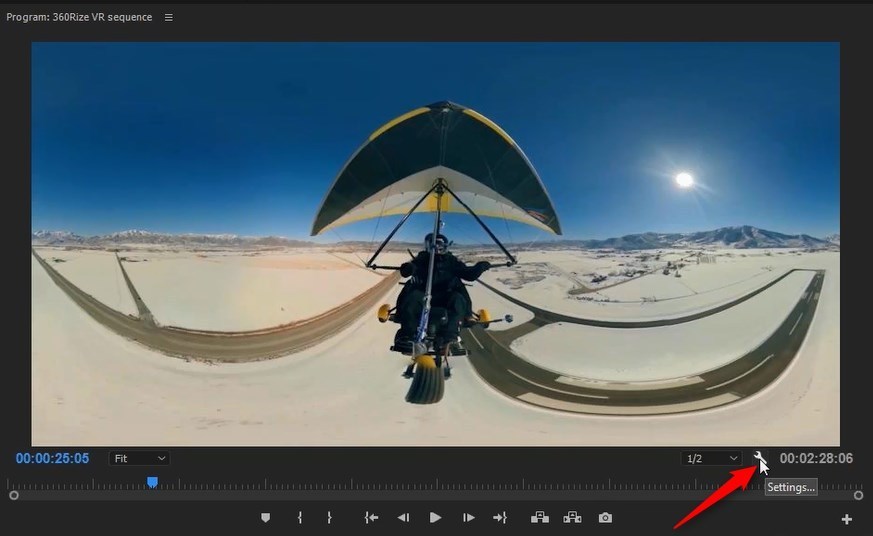 Notice we have controls now. 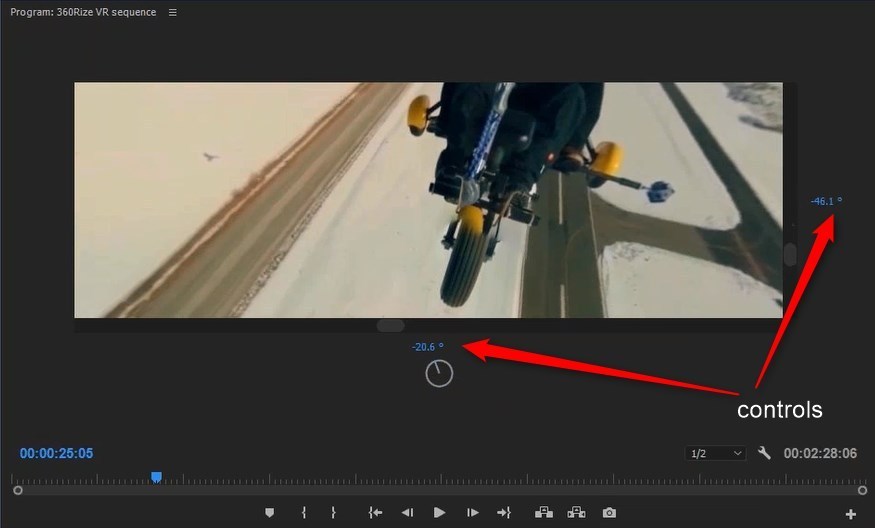 Now, you can see what your viewers will see. When they watch this with their VR headset, let’s say move around with their VR headset, they’ll see this. You can connect the VR headset to Premiere in the preferences you tell it. I’ve connected this headset and say what kind of headset it is and you can watch this on a headset while you’re working on it if you’re that far along. I don’t imagine many people are but if you want, I’ll show you this cool stuff.

On top of this, you can right-click here. You can also access the controls by right-clicking inside the video. Here’s the VR video again. It’s a different place here but it’s down here now. It says you can check settings. 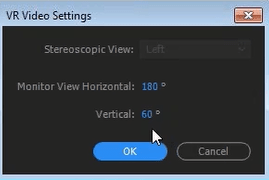 The settings allow you to determine how wide you want your monitor view to be. It doesn’t change the way video is and ultimately export it but it changes your view.

While it’s doing controls down here like this, you can also control it with your mouse.

You can right click again, go under the VR. You can hide the controls. You can control it this way with your mouse.

You can control it this way with your mouse.

I’ll play this video here. As it’s playing, I can change it as if this is like the real experience of somebody watching this video with a headset on. This is probably the Parks City of Utah if you want to go on a skiing trip. That’s a great place to go skiing. I used to work in Salt Lake City for a TV station. I’ve been to Parks City many times, great place to go skiing. That’s the look at VR.

The one final thing is exporting VR. How do you export it? Premiere is cool with that too.

Now the Adobe Median Quarter now recognizes when you’re exporting a VR clip. To do that, you go to 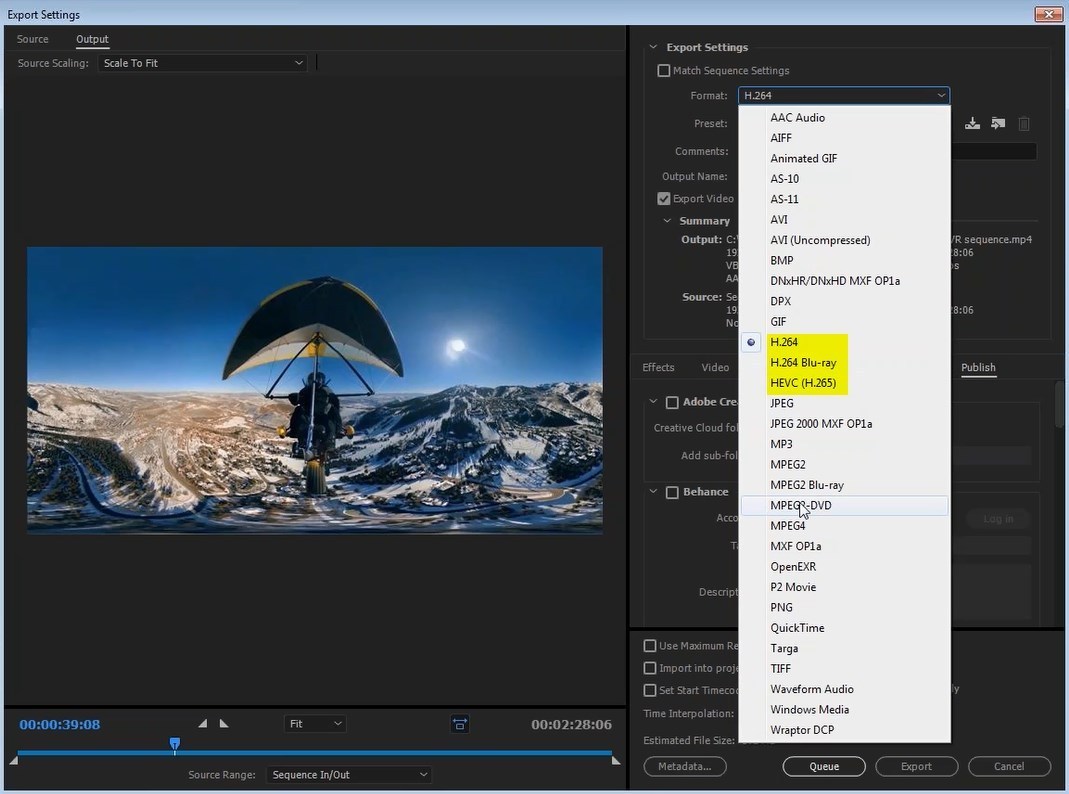 If you choose any of those three, I’ll choose H.264. Then, when you look at the video side of things here, you’ll scroll down to the bottom, it will by default say that the video is VR. It recognizes that you have VR video here.

What it does, if you export it, it adds a VR tag to the video. If you upload it to YouTube or Facebook, those are two places I know that recognize VR video, then the playback will know it’s VR. The viewers can then move around the screen just within Facebook or YouTube which is really cool. It also notices the frame is monoscopic as opposed to stereoscopic over under and side by side as I mentioned.

It knows and recognizes your video as to what it is. And then, when you export it, it will export it with that tag in it such that when you upload it, it works as VR.