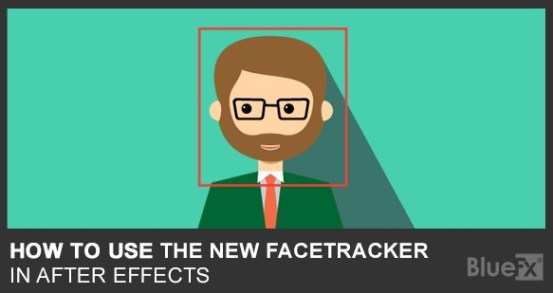 If you have a camera that’s moving, then you can connect things to that moving camera and make it look like it’s stuck to things inside the video which is really cool. You’ll need a moving camera though to have that really work.

Those are the typical features that you find inside tracker but there’s a new feature that came out of 13.5 called the face tracker. The way you turn the face tracker over here is to add a mask.

I showed you about adding a mask before when we did the vignette, you do the same process here.

Once I add the mask, the mask is active, take a look at the tracker. It’s changed dramatically. Although, these four things are gone, these four buttons have disappeared. Now, there’s a dropdown list.

To track the outline of the face, which actually goes relatively quickly, you just click on the track forward button.

You can track forward or backward. We’re going to track forward here. It should, hopefully, take on the shape of the face and it is now tracking that.

Notice how the mask is adjusting for the shape of the face.

Notice, as you see around the points there on the mask changed to accommodate the motion of his face. 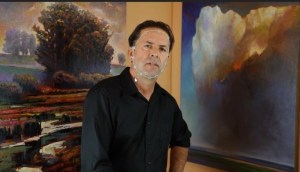 It moves along with that.
It’s creating key frames for all these little points.
The way mask works, when you make key frames is that they don’t key frame each point but, they key frame the whole shape at once basically. You can stop this by clicking that track forward button again.

And that actually did most of the clip. Now, you can see it follows his face. It’s pretty amazing actually, notice how it changed the whole shape of the mask as it goes down like that which is pretty cool.

But we don’t want this disembodied head floating around, right? The way you typically work with this, you take the exact same video and put it below that video that’s masked.
Now, I have the masked version on top and the unmasked version down below.
I can apply effects to one or the other and to cause his face to standout.

I’m going to apply a blur to this bottom one.
To show you a way to do this, I’ll type in ‘blur’ in the effects and presets, search.

I’m going to blur a little more than it should so you can see what’s going on.
Now, you can see that we blurred the background and his face is obviously looking weird but that’s the beginning of the process. I’m going to keep it really blurred like that on purpose for a moment just to show you how this works. 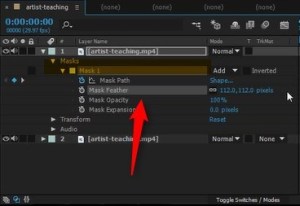 Now, I’ll take the blur so that it’s not so terrible. It’s ridiculous at 48. I can bring it down to maybe 5 or something like that, just a little bit of blur like so. Now, his face has been focused and everything else is blurred. Now it’s probably too much blur. I’ll change that to 6 if you’re trying to be subtle about this. That will be the way to do it.

You also might want to have him pop up the screen a little bit more by adding curves effect to that background. I’ll type in ‘curves’ in the search bar and I’ll apply that to this up in the back as well.

I’ll darken it up a little bit like so. That again, gives us a chance to highlight his face versus the background.

That’s one reason you might want to do that. You can also then apply effects to his face.
You might want to warm it up a bit. I’ll just give it an orange feel to it, make it feel a bit warmer, whatever you want.
But now, you separated it out from the background basically and that face tracker did that automatically. I think that’s phenomenal. Feel free to use that little feature.
We will only keep the background video, we’ll delete all the previous work. I’ll turn the visibility on and work on the top layer again.

Now I’m going to add a mask.
Grab the ellipse tool again and we’ll highlight his face again. And we’ll go to the detailed version here.

Notice again, once you make the mask, this thing changes. Go to the detailed view like that. I’m going to click on the forward button here. Watch what happens in just a second. It shows all these various points which is remarkable.

You can use this on an animation on something else besides the video if you want to.
Let’s say you can turn them into more of an animated figure.
There are multiple ways to do that.
Or you can attach things to his face such as let’s say a mask, by mask I mean a mask you’ll wear in Mardi Gras, something like that. It’ll cover up his eyes.

You can put a patch over his eye. You can attach things to his face that way. I’m going to do something that he’s going to hate in just a second.

That has now created these key frames. I’m going to stop now because obviously it’s not done yet. It takes a long time to get this to end. 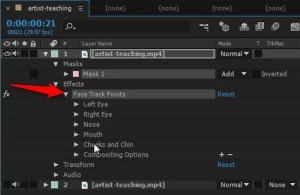 I’m going to show you a little trick here by how you can connect something to a key frame, a set of key frames using an expression. I created a course on expressions on BlueFX so you can always check that out. 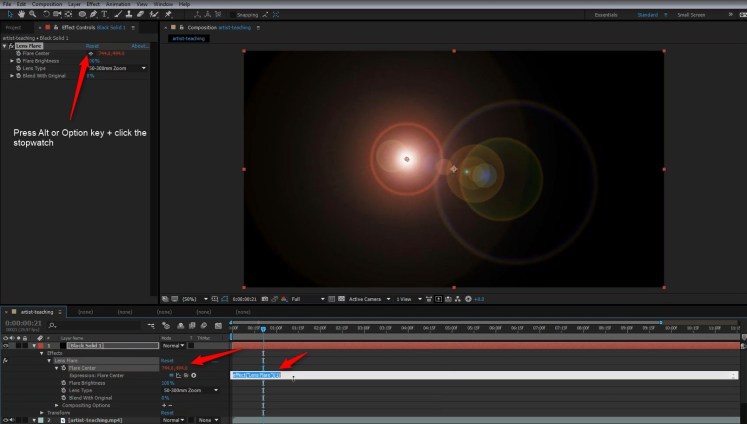 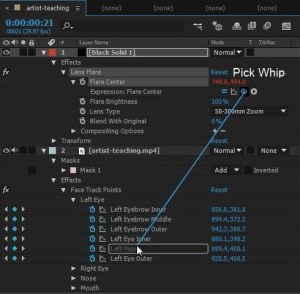 Now the lens flare will follow his eyeball which you don’t see the eyeball. But the way you can make it visible is basically what’s called the blending mode. Right now it’s the mode. If you don’t see mode, just click on this little switch there and that will go from that view to the mode. It says mode but it’s actually a blending mode.

If you go to this dropdown list, you go to add. What add does is it makes black transparent. So since it was black, now the black is transparent and there is the lens flare on his eyes. 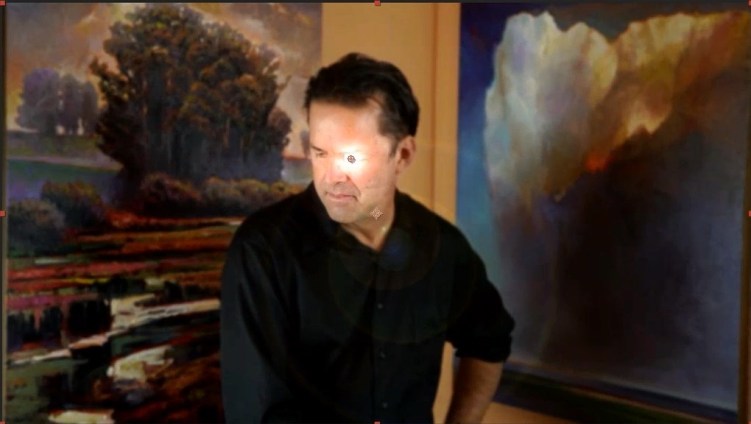 I’m going to take the brightness down a little bit so it’s not so obvious giving Burk sort of a black eye or giving him a white eye. That will follow the motion of his eye.
Pretty wild, huh? Not that I will necessarily do this but I just want to show you how you can attach things if you do this kind of detailed face tracking. Alright, that’s face tracking.

Any thoughts to share with us? Drop us a comment, we’ll be happy to reply to you.

Learn After Effects, the easy way-video