How To Remove Black Background From a Video 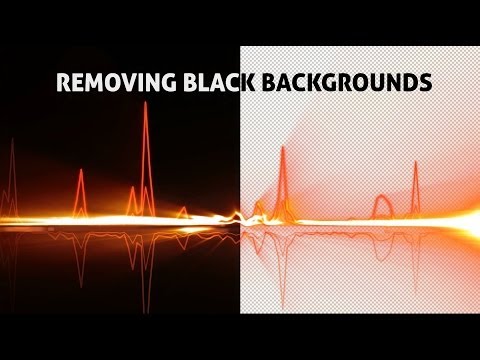 Black Background in After Effects Can’t Be Removed As You Would Think, Its Not Like Green(screen)

Hi and welcome to this tutorial. I’m Remus Hosu for bluefx.net and in this video we’re going to take a look at creating transparency for footage that was shot on black.

Now, some of the video content out there on the market is pre-keyed, which means it has a transparent alpha channel built in but many stock footage you get online just have a regular black background.

So, the first impulse would be to just set the transfer mode to screen but this is not the best solution. As you can see the footage doesn’t look natural at all, it is semi-transparent and vague. Also, the screen mode doesn’t actually create real transparency, it just creates transparency based on the layer bellow so if you want to save your video as a pre-keyed footage for later use it’s not going to work.

Keying out the footage is not a solution either, because the keylight effect doesn’t work on black backgrounds, the color key returns a messy result and the extract effect is also very inaccurate.

There are a few techniques that can help you remove the background but instead of going through them, we’re going to choose the fastest and most efficient way of doing this by using a free 3rd party little plug-in.

The plug-in is called “Unmult” from RedGiant software and you can get it for free on their website. You need to select your operation system and after downloading and unzipping the file just place it in the After Effects Plug-in folder and open or restart After Effects. Here are the paths to the plug-in folder for both Windows and Mac.

The plugin will show up in “Effect – Knoll – Unmult” or you can just type it in the Effects Panel, then all you need to do is drag it on the footage.

Unmult is very useful and efficient for smoke layers (i’m using a blue background so you can see the keyed layer), flares, fire and water drops layers.

Sometimes you may want to add a levels color correction effect to strengthen the alpha. And also an exposure effect if necesarry.
Thanks for watching and see you on our next tutorial.

Get social with us!

Since 2008, our After Effects templates have been used by over 7952 customers, including: