Set Up After Effects To Render Fast 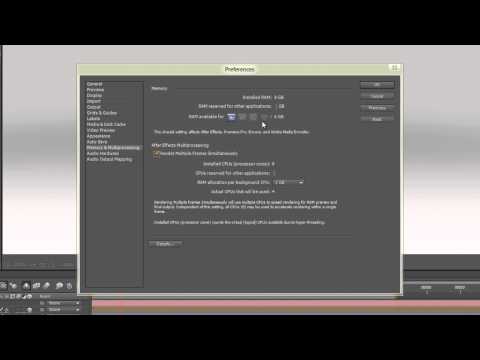 Hello and welcome to this tutorial.

My name is Remus Hosu for bluefx.net and in this tutorial we will take an in depht overview of different setups for maximising AE performance.
We will cover common setups as well as specific setups for AE CS4, CS5 and CS6. We will also configure AE to handle large amounts of RAM and take full advantage of many processors and in a multiprocessor system.

When using AE there are things you need to take into consideration to achieve optimum performance:

Make sure that your system has enough RAM. Optimum performance is achieved with computer systems with at least 2 GB of installed RAM per processor core.

Enable caching frames to disk for standard previews by selecting the Enable Disk Cache preference. We’ll discuss this feature later in this
tutorial. Before rendering, put all of your source footage files on a fast, local disk—not the one that you’re rendering to. A good way to to this is with the Collect Files command.

Set the Zoom quality and color management quality to faster. Go to Edit- Preferences – Previews and in viewer quality section set both values to faster.Enable hardware acceleration of previews. This uses the GPU to assist in drawing previews to the screen. Choose Edit > Preferences > Display, and select Hardware Accelerate Composition, Layer, And Footage Panels.

Before rendering you can press Caps Lock to prevent the screen from autorefreshing. This way your composition will render much faster.

Also, before rendering clear data stored in your RAM by choosing Edit – Purge – All.

SETTING UP THE REGION OF INTEREST :

The work area is the part of the duration of a composition that is rendered for previews or final output. In the Timeline panel, the work area appears in a lighter shade of gray.

When you want to compare one view to another in a Composition, Layer, or Footage panel, take a snapshot. For example, you may want to compare two frames at different times in a movie.

Snapshots taken in one kind of panel can be displayed in another kind. For example, you can take a snapshot of a Layer panel and display the snapshot in a Composition or Footage panel. Displaying a snapshot does not replace the content of the panel. If the snapshot has a different size or aspect ratio than the panel in which you display it, the snapshot is resized to fit the current view.

Snapshots are for reference only and do not become part of the layer, composition, or rendered movie.To take a snapshot, click the Take Snapshot button at the bottom of the panel or press Shift+F5, Shift+F6, Shift+F7, or Shift+F8.

To view the most recent snapshot taken with the Take Snapshot button or Shift+F5, click and hold the Show Snapshot button at the bottom of the panel.To view a specific snapshot, press and hold F5, F6, F7, or F8. To free all memory used to store snapshots, choose Edit > Purge > Snapshot.

You can take full advantage of a multiprocessor system and render multiple frames simultaneously.

By default AE has multiprocessing turned off.

In order for our system to run smoothly we need to reserve RAM for applications.
Increase this value to leave more RAM available for the operating system and for applications other than After Effects and the application with which it shares a memory pool. After Effects CS4 and CS5 share a memory pool with Premiere Pro, Encore and Adobe media Encoder. AE CS6 shares a memory pools with Premiere Pro, Encore, Adobe Media Encoder and also Photostop and Prelude. In this case 2 gb is a fair setup for a total of 8 gb of RAM.

So keep in mind that if you run applications other than those with which After Effects shares a memory pool, and you don’t allocate adequate memory to other applications, performance can be greatly reduced when the operating system swaps RAM to the hard disk.

Another great way to improve your performance is by activating Media and Disk Cache in AE. Select Edit- Preferences- Media and disk cache.

The minimum amount of cache should be 2 GB but it’s recommended to set this value up to 12 GB of hard disk space. If possible, use a fast disk to assign the disk cache folder to, such as a SSD drive. However, in AE CS6, it’s best to set the cache size to a bigger value. In fact, the bigger , the better, but make sure you don’t specify a value that is bigger than the size you have available on your disk.

So, why such a large value?
Well, in After Effects CS6 there is a new feature called persistent disk cache.
Persistent disk cache improves performance by retaining frames stored in the disk cache between sessions, saving rendering time as you work on a project or other projects that might use the same cached frames.

Use Cache Work Area In Background to fill the disk cache for a composition’s work area while continuing to work. This technique is useful when you do not expect to make changes to a downstream composition, or precomposition. This feature works with multiple compositions, as well.

Get social with us!